Even with less than ideal design features, the state VAT pushed up revenues. The GST, with an improved design and a fully integrated IT system for both the Centre and the states, will fare better

Revenue uncertainties have dominated discussions about the goods and services tax (GST). This has been especially pronounced among the states which see the movement towards the GST as a leap in the dark.

What then are the reasons to assert that the implementation of GST will lead to revenue buoyancy? One can look for answers in the earlier experience of the states which implemented the value-added tax (VAT) in 2004-05 when there was a similar air of “revenue pessimism”. The table alongside indicates the trends in state VAT collections for the period 2001-02 to 2008-09 (covering both the pre-VAT and post-VAT periods).

One can see from the trends that 2004-05 (the year the state VAT was implemented) was an inflexion point when revenues went up sharply, indicating the impact of implementation of the state VAT that replaced the retail sales tax. Even after the implementation of the VAT the revenue momentum was maintained. The revenue buoyancy could have been even more but for some states such as Tamil Nadu and Gujarat that retained generous sales tax deferral schemes. The debilitating effects of a conscious base erosion cannot be laid at the doorstep of the new tax. What is important is that this revenue buoyancy was achieved despite less than ideal design features of the state VAT: high thresholds, continuance of exemptions and a non-integrated IT system. It would therefore be fair to expect that the GST, with a far better design and a fully integrated IT system for both the Centre and the states, will deliver far greater revenue buoyancy.
The design of the GST suggests revenue buoyancy for other reasons. First, because of the phasing out of exemptions and the creation of an audit trail of transactions along the entire value chain, buyers will purchase goods and services only from a compliant supplier (to avail of full credit of taxes on input/intermediates). Second, as both the Centre and the states will tax concurrently a common taxable base, dual monitoring by both will improve compliance and boost revenues. 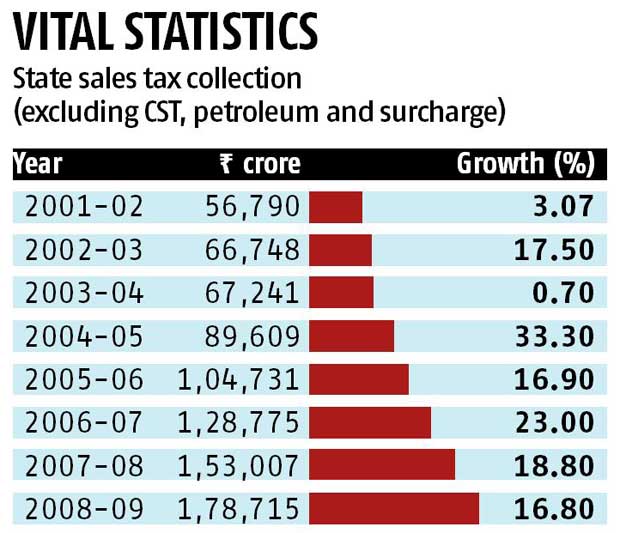 Third, services will bear a higher incidence of duty post GST, sharing a greater proportion of the tax burden – the rate effect. Fourth, as the taxable event in the GST shifts from “manufacture” to “supply of goods” more value addition in manufacturing will come into the tax net. Today, even though these are supposed to be covered under service tax, in practice they fall between the cracks in “goods” and “services” – the base effect will operate in manufacturing.

Finally, the GST Network that will provide the IT backbone for the tax has “invoice-matching” features built into it. The application software now being developed by Infosys will match supplier information furnished in the return with the purchaser’s details. Any mismatch not addressed within a stipulated time period will invite penal provision leading to denial of input credit. This will largely address the problem of input credit frauds.

While revenue buoyancy is assured by the very design of GST, there are some lost revenue opportunities and some lost tax credits embedded in capital goods due to the exclusion of real estate from the GST. There are huge advantages of including real estate in the GST, even more than the inclusion of alcohol and electricity. First, indirect tax collection data for 2014-15 indicates that the total amount of capital goods purchases on which Cenvat (Central Value-Added Tax) credit is availed of is about Rs 1.60 lakh crore, divided between goods (Rs 1 lakh crore) and services (60,000 crore). National income account data suggest that investment in plant and equipment for 2014-15 by non-government and non-household units was about Rs 7.5 lakh crore. Therefore, it would appear that the blocked taxes on capital goods could account for as much as 75 per cent of the total investment. A large portion of this investment is absorbed by the real estate sector. Inclusion of real estate in the GST would boost investment in the construction sector by bringing down capital cost and create jobs in what is probably the most employment-generating sector.

Second, it could be the third arrow in the quiver to battle the menace of black money income – the other two arrows being the recently passed Black Money (Undisclosed Foreign Income and Assets) and Imposition of Tax Act and the Benami Transactions Bill (still waiting to be passed by Parliament). The GST could therefore be another instrument to fight black money income, and revenue gains could accrue by bringing more transactions in the open – the revenue gains could even be greater for direct taxes. The measure would clean up the land market, the most unreformed segment in the factor market -recent reforms have largely focused on the product market.

Some may counsel restraint, citing strong reservations by the states. This measure could be made more palatable through a “grand bargain”: subsume stamp duties in the GST, bring real estate under the GST but allow states to tax tobacco additionally, like the Centre under the GST plus Centre plus state formula.

Sceptics must understand that transformational changes are not made by demonstrating caution. A good example is how Abraham Lincoln passed the Lands Grant Act, 1862, that provided land grants for setting up private universities (laying the base for the pre-eminence of American universities today) during the height of the Civil War when Confederate troops had almost reached the gates of Washington. The inclusion of real estate will be one such transformational move.

The very design of the GST will bring in revenue buoyancy, which can be cemented and secured by the inclusion of real estate. As the GST is being implemented when the economy is on an upswing, the revenue effect will be even more pronounced. Higher revenue generated can help create a strong safety net for the poor. Growth will promote welfare just as more welfare will make growth inclusive. Growth and welfare will then be the symbiotic twins they truly are.

The author is retired member, Central Board of Excise and Customs; [email protected]

HOPES FOR GST WITH RELEASE OF MODEL LAW

Govt may increase service tax rate by 1-2% before introduction of GST: Sachin Menon, KPMG in India

Virtual payment system instead of an e-wallet for tax refunds: GST council