GSTN is a not-for-profit entity owned by Centre, states and non-govt financial institutions, and is building the technology backbone for new tax regime.

NEW DELHI: The number of such states has increased four-fold to 21 from only six; Karnataka & Tamil Nadu building their own tech back-end

In less than three years, there has been a four-fold jump in the number of states which are shedding their inhibition and have asked the Goods and Services Tax Network (GSTN) to handle their complex back-end processing when the revolutionary tax reform rolls out from April 1, 2017.

GSTN is a not-for-profit entity owned by the Centre, states and non-government financial institutions, and is building the technology backbone for new tax regime. According to a government official, a total of 21 states are now relying on GSTN to manage back-end tasks such as tax settlement, assessment, refunds, etc. The number of such states was only six when GSTN was first set up.

“More and more states have realised now that they can just reply on the common application that GSTN is building instead of building their own technology systems,” said the official. The person who did not wish to be quoted said that smaller states such as Arunachal will benefit hugely out of it since it doesn’t make sense for them to take the effort of appointing an agency and spend on building the technology just for a few thousand tax payers. 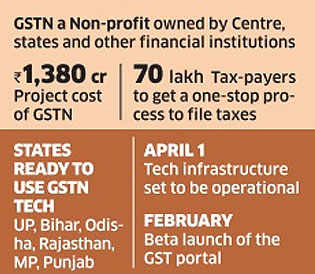 While large states such as Uttar Pradesh, Bihar and Odisha had already joined GSTN, state such as Rajasthan, Madhya Pradesh and Punjab which had earlier decided to build their own systems have also agreed to ride on GSTN technology now.

Bihar was one of the early big states that decided to not build their own technology and relied on GSTN. Sujata Chaturvedi, commissioner and principal secretary, commercial taxes, Bihar said that it was the most “practical” thing to do.

“The main design and the set up is coming from GSTN. It is advantageous to be in the same fraternity right from the beginning.Also, we didn’t want any anomalies from our end or any patch work to happen at a later stage.” Chaturvedi added that letting GSTN build the back-end modules for tasks such as returns, registrations and assessment will help drive synergies since there was no common platform earlier. Experts said that the reason behind the shift is an increased understanding by states that  they can leave the task of building the complex technology to GSTN saving time and effort while they focus their energies on rolling out the new tax regime. Neel Ratan, executive director of audit and consultancy firm PwC said, “What’s the point in duplicating the effort when the states can just ride on the technology which is being developed centrally.”

However, large state such as Karnataka, Tamil Nadu and Maharashtra etc which already have advanced systems for the existing tax regime are building their own tech back-end. While Tata Consultancy Services has deployed the solution for Tamil Nadu some states have sought the help of the National Informatics Centre (NIC), the government’s technology agency.

ET had reported earlier that GSTN is committed to readying the technology infrastructure by April 1. While testing of the software should start by October, a beta launch of the GST portal is planned for February.

India’s second-largest software company Infosys has been mandated to develop and run GSTN in a project worth Rs 1,380 crore.

GST is Indeed a Big Reform, But Flawed Implementation Could Prove to be Double Edged

CAIT seeks exemption for MSMEs from input credit under GST