MUMBAI: The Goods and Services Tax (GST) has been heralded as India’s biggest reform since the 1991 liberalisation but one aspect of it has made certain small businesses nervous.

Given that it will be virtually impossible to escape the tax net once the new levy is implemented, will this make them fair game for authorities investigating evasion in previous years? That fear is pushing many to make use of the government’s black money window that closes at the end of the month. Prime Minister Narendra Modi, in fact, pointed to abuse of the current system in his Lok Sabha speech on GST.

“We all know how the system of kacha bill and pakka (fake and real) bills operate. But GST will bring an end to the fake bills as traders will provide the real bills and accounts so that they benefit (in getting input tax credit),” Modi had said on August 8. All businesses — manufacturers, distributors, retailers — will have to register on the GST network.

The levy is expected to be in place next year. Once captured in the GST system, tax officials can make an educated guess about income and evasion over the past years. “GST will not only impact the indirect tax collection but also the income tax collections as this is one tool where the tax officials will have a data to calculate incomes of people, against the income taxes paid by them,” said the tax head at consultancy. 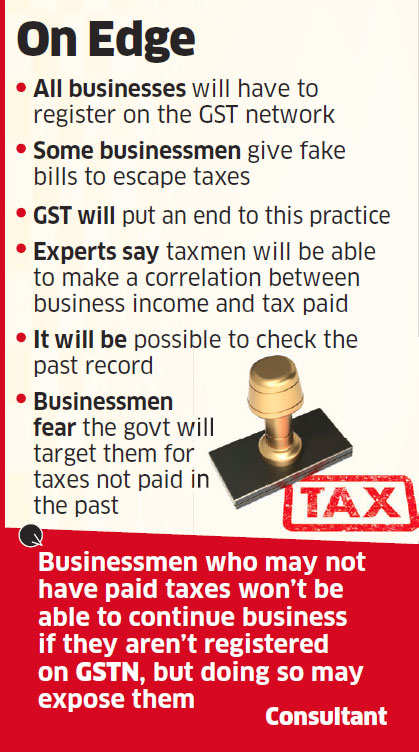 At a meeting of retailers in Mumbai in August, many were asking experts whether the government would target them for taxes not paid in the past. Some have been prompted to disclose assets under the income declaration scheme (IDS) and more may do so before the window closes on September 30. Apart from avoiding bills altogether, under invoicing and over invoicing are also typically used to escape taxes.

“There were basically two types of fraud committed by businessmen — first is unilateral, where under invoicing or over invoicing is done only by one of the two people transacting. And then there is bilateral,” said Bharat Goenka, managing director of Tally Solutions Pvt. Ltd, which is developing GST software for Indian companies.

Some experts said while unilateral frauds would drop drastically, bilateral ones may be difficult to detect. Tax firms are advising at-risk businessmen to  disclose black money under IDS. “Businessmen who may not have paid taxes won’t be able to continue business if they aren’t registered on GSTN, but doing so may expose them,” said one consultant.

“It’s a vicious circle, and many want to come clean,” said another. Some say there is concern among retailers but more about systems rather than retroactive crackdowns. “Firstly, everyone wants to comply with the tax rules, but many are worried about the cobweb of complicated processes, ” said Praveen Khandelwal, secretary general, Confederation of All India Traders.

“Once GST comes in, I do not think anyone can be targeted retrospectively for not paying VAT, excise or other taxes, and these would be repealed.” The tax head of a New Delhi-based consultancy said it will be possible to check on the past record.

GST: Not a one-shot panacea for all the ailments of logistics sector

GST on Bitcoin? Cryptocurrency trade may get taxed 18%: Report