NEW DELHI: Prospects of the GST bill being passed seem to have brightened as differences between the government and Congress have shrunk to just one contention — the demand to cap the tax rate at 18% by making it part of the Constitution Amendment Bill.

Top Congress sources indicated the party was keen to pass the tax reform but saw its call for a legislative guarantee on the peak rate as a “non-negotiable issue” as it would protect the poor from the burden imposed by indirect taxes.

Though the demand has proved a deal-breaker with the Centre arguing that making the tax cap part of the bill ran counter to the norm that specific rates were not written into the law, sinking in differences showed the two sides have narrowed the areas of dispute.

The government has held that incorporating the tax rate in the bill pending in Rajya Sabha would make it difficult to tweak rates in case of an emergency and while this remains a hurdle, a political push could make a difference. 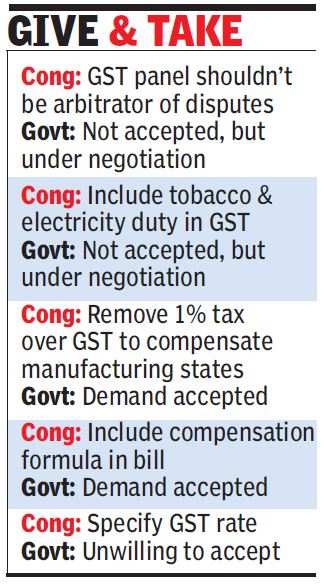 “If our demands are met, the GST bill can be passed in less than 5 minutes,” well-placed Congress sources said.

Though the government has not been ready to commit itself on the tax cap even though it sees 18% as a reasonable rate and resolving this thorny issue may need more effort, a positive tenor in the conversation may mean the two sides could be more ready to reach an understanding.
The view in Congress is that the bill must signal a clear assurance that indirect taxes don’t become a bane for ordinary people as well as small and medium businesses.

Responding to the argument that the GST rate should be set by a council comprising states and Centre and legislating it means parliamentary approval will be required to raise the cap in an emergency, Congress feels this should not be an insurmountable challenge as no national party would block the measure in such a situation.

The party is firmly of the view that legislating the tax rate serves as a strong reassurance for the economically vulnerable and this is intrinsic to Congress’s view favouring transparent direct taxation.

‘GST will become a reality soon’

Delay in GST will add to government’s burden

A Hand book for GST in India (e-book) – 2nd Edition

How to Reap the Supply Chain Benefits in India’s GST