Contrary to popular belief, the passage of the GST Constitutional Amendment marks only the beginning of a long-drawn process that should ultimately result in the implementation of a unified GST in India at best by the second half of FY18.

Although the adoption of a unified GST is a major step forward from a long-term perspective, in the short-term this is likely to result in:
(1) a mild pickup in inflation as hitherto untaxed goods and services are now brought under the tax net,
(2) a meaningful loss of jobs in the informal sector as this sector will no longer be able to fly under the radar of the taxmen, and
(3) consequently trigger pro-electorate measures in the form of higher revenue expenditure from FY18 onwards as the central government begins preparing for the 2019 general elections.

The Event
The Rajya Sabha (i.e. the Upper House of Parliament) on Wednesday cleared the GST (122nd constitutional amendment) bill, thereby empowering the Centre and the state legislatures to have concurrent powers to make laws on GST.

Contrary to popular perception, the passage of the GST constitutional amendment marks only the beginning of a fairly tedious legislative and operational procedure that should ultimately result in the implementation of a unified GST in India. Three key inter-related procedures need to be completed successfully to pave the way for GST implementation hereon, namely:

► Legislative procedures: The GST constitutional amendment will now need to be passed by 50 per cent of state assemblies. Thereafter, the Lok Sabha and the Rajya Sabha will have to pass the central GST Bill with a simple majority. Then the states too will have to pass their own GST bills.

Thus, there is every likelihood that the government will miss the April 1, 2017 deadline for GST implementation and we expect GST to be implemented only by the second half of FY18 at the earliest.

Leaving aside the politicking required to expedite the passage of the GST through state assemblies and leaving aside the horse trading that will take place over the nitty-gritty of the GST law (which will have to be framed and passed through Parliament), the main reason for our politicians taking it easy on GST implementation is the fear of job losses.

Specifically, while the formal sector (especially large and midsized companies) will benefit from the GST (due to the scale of economies around manufacturing and logistics), the casualties will be the mom & pop companies, which currently fly under the radar of the taxman. The latter sector accounts for six times as many jobs as the former sector; hence the ruling dispensation’s apprehension of GST adversely impacting jobs even as it benefits listed companies.

Even in its diluted form, it will be direct tax revenue-accretive mainly because GST implementation is likely to result in lifting income-tax collection, as: (1) GST payments by tax-payers will be linked to their respective Permanent Account Number (PAN); and (2) the National Securities Depository (NSDL) which maintains the Tax information System (TIN) will also look after the GST database.

This integration of the indirect tax system with the income tax system will enable authorities to triangulate information, thereby automatically leading to improved tax buoyancy.

Will GST be inflationary?
As indicated in the Arvind Subramanian panel’s December 2015 report on GST (http://goo.gl/NepsSN) a revenue neutral rate (RNR) in the 15-15.5 per cent range with a lower rate of 12 per cent and a standard rate of 18 per cent would have no aggregate inflation impact.

However, a higher RNR with a lower rate of 12 per cent and a standard rate of 22 per cent would increase inflation by between 0.3-0.7 per cent. Irrespective of the ultimate GST rate that the GST council agrees upon, inflation is likely to rise as hitherto untaxed goods and services will now be brought under the tax net.

How is GST implementation likely to affect BJP’s policies from FY18?
As highlighted in our note dated July 27, 2016, our checks in New Delhi suggest the BJP high command is acutely aware of the adverse electoral effects this reform could create as GST implementation is likely to result in higher inflation, lead to loss of jobs in the informal sector and increase grievances among the taxpayers. 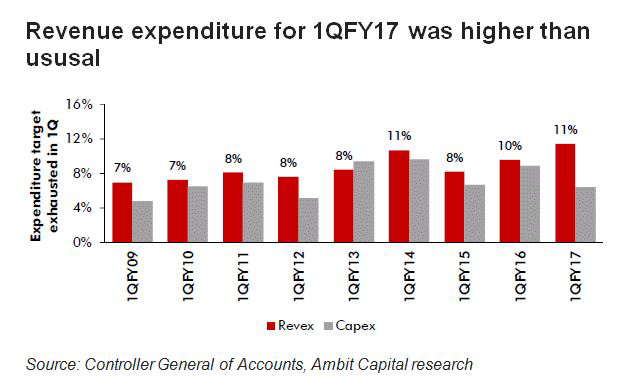 Our checks suggest this is likely to trigger two offsetting pro-electorate mechanisms in FY18-19 including: (1) the government continuing with its pro-revenue expenditure tilt that it first displayed in FY17; and (2) MUDRA – a scheme to give soft loans (subsidised by the government) of Rs 2-10 lakh to low income self-employed people – receiving significant focus in the run-up to CY19 General Elections and potentially becoming the ‘MGNREGA’ of NDA-II.

(Ritika Mankar Mukherjee is a Senior Economist (Vice President) with Ambit Capital. Views expressed in this report are her own and do not represent those of ETMarkets.com)