NEW DELHI: The upcoming budget is likely to see a massive cleanup of exemptions available for imports as a precursor to the roll out of goods and services tax.

The finance ministry has begun discussions with other ministries and departments to move some essential direct exemptions to subsidy-based ones.

“The import regime also has to be in line with the goods and services tax regime,”said a government official.

Changes to the import duty framework will be in focus in the budget, the official added. There are two components of import duty: basic customs duty and countervailing duty (levied in lieu of excise duty).

But the system is laden with exemptions for both. A number of incentives are provided by different ministries through their schemes, including tax concessions and exemption from basic customs duty in some cases and countervailing duty in other. North Block now wants these schemes rejigged in view of the GST regime, which will work on the principle of minimal exemptions.

The government is proposing to roll out GST from next financial year. Blanket CVD exemptions cannot be allowed under the proposed GST regime as states would not agree to it.

Moreover, the GST framework is proposed to function on the principle of upfront payment of duty, which can be refunded later to incentivize a sector. A number of sectors enjoy exemptions from import duties: BCD in some cases and CVD in the other. 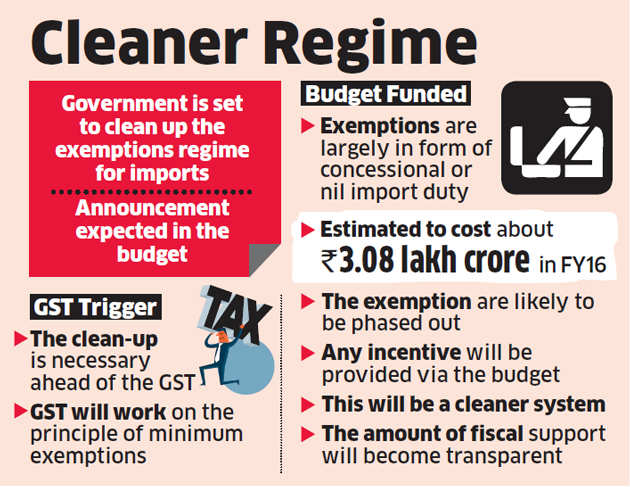 The finance ministry has in its discussions with the ministries and departments told them that they need to brace themselves and rework the schemes offered by them.
It said they will now have to provide for tax concessions through their budget instead of direct exemptions, the official told ET. In some cases, exemptions are provided under schemes while in some others these are given by the finance ministry directly on request by the ministry or department in charge of the sector.
The government is also keen to reorient the import duty structure in line with the ‘Make in India’ programme. According to estimates, the revenue impact of tax incentives under the customs duty regime is estimated at Rs 3.08 lakh crore in FY16, up from Rs 2.84 lakh crore the year before.
The items accounting for the bulk of the benefits are precious stones and jewellery, mineral fuel and mineral oils and edible oils.
Source: http://timesofindia.indiatimes.com/business/india-business/in-run-up-to-gst-budget-to-see-cleanup-of-imports-sops/articleshow/55887449.cms?TOI_browsernotification=true
Post Views: 2,065

Beware! After GST, choosing a wrong vendor can kill your business

Over 50 builders face probe for profiteering under GST

A GST with imperfections and anomalies