The constitutional amendment Bill to provide the legal framework to subsume all indirect taxes is listed for consideration in the Rajya Sabha on Wednesday.

NEW DELHI: The entity tasked with providing the information technology infrastructure for the goods and services tax expects to be ready for the rollout of GST from April 1, 2017, should the Centre and states pass legislation to bring about the biggest indirect tax reform in the country.

Testing of the software should start by October and a beta launch of the GST portal is planned for February, Prakash Kumar, the CEO of Goods and Services Tax Network (GSTN), a not-for-profit entity owned by the Centre, states and non-government financial institutions, said.

“It will be tested by a chosen group of tax professionals, officers and businesses,” said Kumar, a former executive of Microsoft .

The constitutional amendment Bill to provide the legal framework to subsume all indirect taxes is listed for consideration in the Rajya Sabha on Wednesday. While the politics of GST has been tough, putting in place the technology systems that will in effect make India into a common market is a complex exercise.

Also Read: The advantages of GST: Take a look at benefits

India’s second-largest software company Infosys has been assigned the mandate to develop and run GSTN in a project worth Rs 1,380 crore. The portal itself will be a one stop for filing and processing of all taxes for almost 65 to 70 lakh tax-payers in the country and is being designed by a specialised design unit of Infosys.

“The idea is to make the portal very intuitive and user-friendly. Our aim is to make the entire process completely paperless and we are devising multiple ways to ensure that even the smallest of retailers can file their taxes online,” said Kumar. 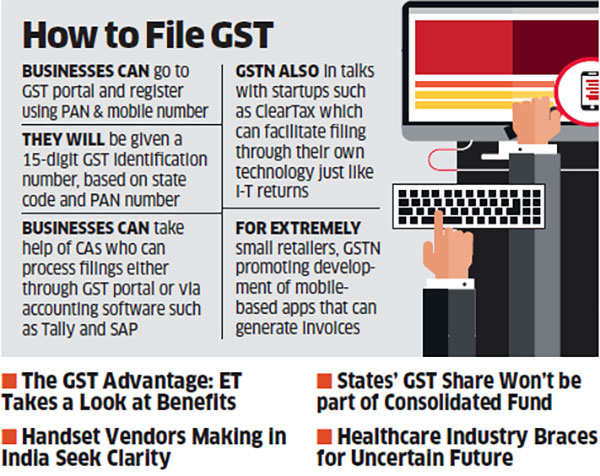 GSTN is currently in talks with accounting software firms like SAP and Tally Solutions and online portals such as ClearTax. These can then use software application programming interfaces and help businesses in filing taxes through their own systems without having to log into the portal. “Today, one can file their income-tax returns through private tax portals without going to the department’s website, we are aiming for a similar system,” said Kumar. People will have the option to either file their taxes themselves through the portal or use the services of accountants who can use the portal on their behalf or deploy their own software.

The portal will begin migration of data from existing taxpayers under VAT/excise/service tax and collect balance data to complete the database as per GST registration format so that background details of all taxpayers are there in the system before the new regime is operationalised. States have already held 10-14 rounds of collecting information from taxpayers to get as many people on board the new system before it goes live.

The portal, which is expected to be ready in month, will allow new businesses to register using their PAN and mobile number or Aadhaar number. All businesses will be given a GST identification number, which will be a 15-digit code, consisting of their state code and ten digit PAN. GSTN has already validated the PAN of 58 lakh businesses from the tax department.

Kumar added that the fact that businesses may not be very techsavvy to go for a completely online system is not a concern since “today all taxpayers are already filing taxes online under VAT, service tax, and excise. So there is hardly any change”. For extremely small retailers, GSTN is promoting development mobile based applications that can generate invoices and also process returns, Kumar said.

Another official who is aware of the plans said GST consultants will be appointed who can collect returns from businesses in an area and upload it for a fee. “They will be like income-tax consultants,” the person added.

Also, processes are ongoing to train some 2,000 “master trainers” about the new system and these trainers will in turn train others such as accountants, lawyers and tax officers.

The GST portal will be a front for the taxpayer where registration, return and payments will be filed. It will also provide helpdesk support. The technology at the backend will have the power to analyse data for trends on sales, tax filings etc. “This will provide a lot of visibility into the trade happening in the country and help in policymaking,” said Kumar.

However, the tax department has retained some key functions with itself, such as audit and enforcement, as well as adjudication and recovery. Under GST, only around 3-5% taxpayers are expected to be picked up for scrutiny, so for balance 95% the interaction with the tax department is expected to end at the portal itself.

But, 19 states including UP and Bihar have asked GSTN to develop software for the backend function while tax departments of others such as Kerala, Karnataka and Gujarat among others are building their own technology systems to handle statutory functions.

How to Register Under GST: All Your Questions Answered

GST roll-out: Why electricity should have been brought under the new tax ragime