Most respondents to Mint-instaVaani poll says NDA paying price for own actions during UPA’s tenure and, more recently, in Arunachal Pradesh and Uttarakhand

Over four-fifths of respondents to a Mint-instaVaani poll believe that the goods and services tax (GST) will have a positive impact on the economy once passed.

At the same time, almost two-thirds are of the opinion that the National Democratic Alliance (NDA) is paying the price for its own actions during the United Progressive Alliance (UPA) government’s tenure and, more recently, in Arunachal Pradesh and Uttarakhand, where it attempted to destabilize elected governments.

Though the bill has been on the NDA government’s priority list ever since it came to power, it is stuck in the Rajya Sabha. 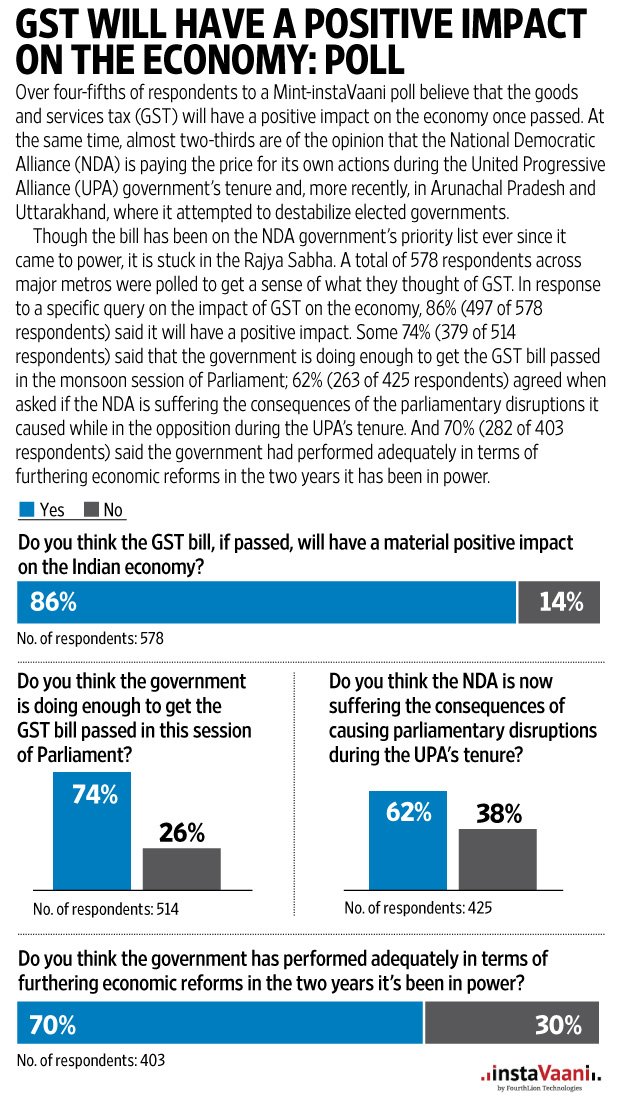 A total of 578 respondents across major metros were polled to get a sense of what they thought of GST. In response to a specific query on the impact of GST on the economy, 86% (497 of 578 respondents) said it will have a positive impact.

Some 74% (379 of 514 respondents) said that the government is doing enough to get the GST bill passed in the monsoon session of Parliament; 62% (263 of 425 respondents) agreed when asked if the NDA is suffering the consequences of the parliamentary disruptions it caused while in the opposition during the UPA’s tenure. And 70% (282 of 403 respondents) said the government had performed adequately in terms of furthering economic reforms in the two years it has been in power.

Soon, no e-way bill if GST returns not filed for 6 months