GST in India will be dual-model based that is taxes will be levied both at the central level (CGST) and at state-level (SGST). The input tax credit of CGST would be available for discharging the CGST liability on the output at each stage. Similarly, the credit of SGST paid on inputs would be allowed for paying the SGST on output. No cross utilization of credit is permitted.

Apart from levying CGST and SGST, in case of interstate transactions, the centre can also levy Integrated Goods and Services Tax (IGST). IGST is not a tax in addition to SGST and CGST, but instead it is only a mechanism to monitor the interstate trade of Goods and services and further to ensure that the ultimate SGST has gone to the consumer state.

Also, GST will be a destination-based tax. This implies that all SGST collected will ordinarily accrue to the State where the consumer of the goods or services sold resides. The Constitution (122nd Amendment) Bill, 2014, deals with the introduction of Goods and Services Tax (GST) in the country. The Bill empowers the centre to impose an additional tax of up to 1%, on the interstate supply of goods for two years or more. This tax will accrue to states from where the supply originates.

Alcoholic liquor for human consumption is exempt from GST. Initially, GST will not apply to petroleum crude, high speed diesel, motor spirit, natural gas and aviation turbine fuel. The GST Council will decide when GST will be levied on them. 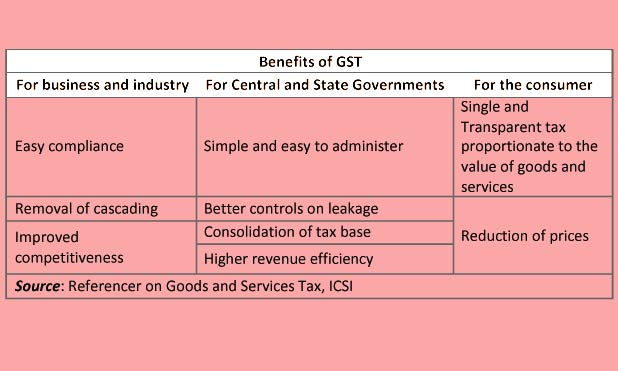 The shift from Sales/Excise tax to VAT to GST: Numerical Explanation

Under the current tax system, there is an effect of tax cascading. However, the tax cascading effect got eliminated under the VAT regime. This can be illustrated with the help of a numerical example explaining the bakery supply chain.

Example of a Cake supply chain 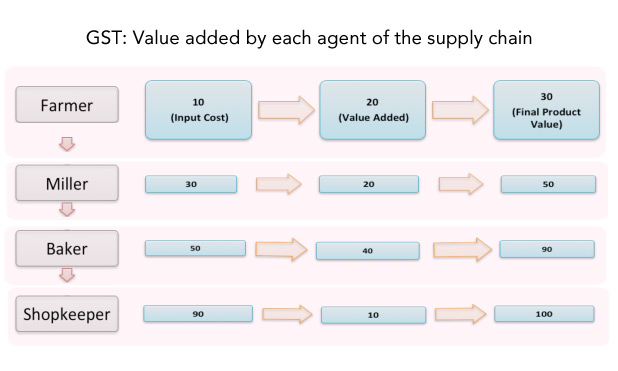 Here the sales/excise tax is considered 10% and VAT is also taken as 10%. 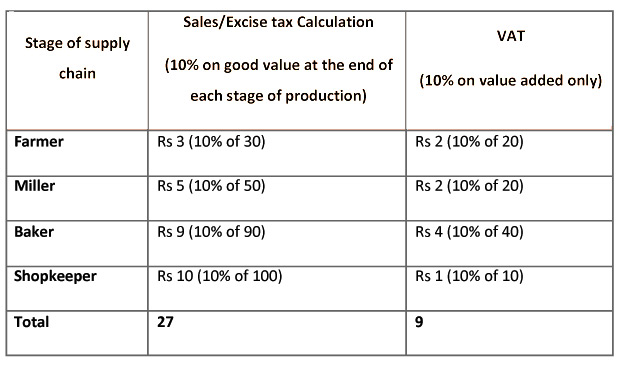 The total tax under the sales/excise tax regime is almost 3 times of the total tax under VAT. This is clearly showing the problem of tax on tax (tax cascading) and due to this the cost of production increases. However, VAT is imposed on the value added only. This means that whatever value addition any person in the supply chain does, on that value addition, one has to pay tax to government. Under VAT, the cost of production decreases and the final cost to the consumer does not include the effect of tax on tax.

Though in shifting from sales tax/excise tax regime to VAT, there is a loss of revenue to the government, but still the shift is favourable as the government faced the problem of huge tax evasion under the sales tax regime.

The final shift is made to GST regime. GST means Goods and Service Tax is eliminating many indirect taxes like VAT, Central Excise duty, Sales Tax, Service Tax etc., but the tax calculation for GST will remain same as it was for VAT. Due to subsuming of the other taxes and combining all under one tax regime, GST will reduce the final cost of the product for the consumer and let businesses work smoothly.

Implementation of GST will have widespread influence on the revenue collection, losses or gains accruing from taxes, Tax-GDP ratio both for centre and states and also on provision of compensation for the states. Depending on the level of economic activity being carried upon in any state and the level of development of the state, different proposed rates of GST will affect states differently.

Karnataka, Maharashtra, Andhra Pradesh, Gujarat, Tamil Nadu, Bihar, Odisha, Chhattisgarh, Delhi, Uttar Pradesh, Jharkhand, Rajasthan, Madhya Pradesh, West Bengal, Haryana and Pondicherry account for almost 79 per cent of the VAT base in the country. The states like Tamil Nadu, Gujarat and Maharashtra, which have a strong manufacturing base and low consumption, will suffer more if GST rates will be fixed somewhere around 18-20 percent. Among others like the low income states with low consumption level, the GST is being the destination based tax will not prove to be very significant for bulk revenue collection.

It is also apprehended that as compared to state GST, centre GST will be higher and thus a larger part of the tax revenue will move to centre only, thus creating vertical imbalance in the country. In terms of autonomy, states will tend to lose their financial autonomy as there will be uniform GST rates across the country with no liberty to states to fix their own rates.

With regard to the compensation of states in terms of revenue losses due to the introduction of a uniform tax, centre has provided a firm assurance that states will be compensated for a full five years for any loss of revenue from GST rollout. The amendment to 2014 Constitutional Bill also clarified that Central GST and the centre’s share of IGST will also get distributed between the centre and the states. Also, till now, all the revenue that has been collected by centre or states was getting accumulated in the consolidated fund of India or State Consolidated Funds. But with the introduction of GST, the revenues will not move to consolidated funds, as then the disbursal of funds to states will become difficult.

The points discussed above in the article regarding implementation and implications of GST, hold a critical importance. It is imperative for everyone, including central and state governments, consumers, manufacturers and service providers to clearly understand the concept of GST and be readily prepared for its implementation with sufficient requisites. At first sight, it might be apprehended that on its implementation, GST will prove to be a “win-win” situation for all. It is business friendly, will generate investments in the country and thereby build a strong investor confidence in Indian businesses. Moreover, for government, the problems of tax cascading or tax evasion will also get resolved.

But, on the other hand, given the socioeconomic structure of India and the income disparity among the Indian states, applying GST might prove to be a success in short term, but in a longer term it may make a poor, poorer and a rich, sailing smoothly. The basic reason behind this is that by considering a uniform tax rate for the country, GST is not taking account the widespread income inequality among the states. This might not be a very appropriate model for a growing economy like India. Thus the exact situation cannot be ascertained before its implementation.

States may get to fix cap on professional tax

Planning to Sell Goods Online? Here are All the Taxes You Need to Know About

‘Gross Miscalculation Of The Value Of GST’