On the face of it, the Narendra Modi-led National Democratic Alliance (NDA) government’s track record on its legislative performance over the past two years appears to shine, compared to the first two years of the previous two regimes of the United Progressive Alliance (UPA) under Manmohan Singh. But, the real test of UPA’s legislative skills will come over the next 12 months as and when Parliament takes up the legislation related to the goods and services tax, says legal experts.

However, legal experts have a mixed reaction to the government’s track record in managing its legislative business. “The government has done fairly well on the legislative front in the past two years,” says Debanshu Mukherjee, who heads the corporate law financial regulation vertical at Vidhi Centre for Legal Policy. The government has been successful in enacting several important legislation, some of which are regarded part of ‘structural reforms’, including the Bankruptcy Code, the Aadhaar Act, the Commercial Courts Act, the amendment allowing 49 per cent foreign direct investment in the insurance sector, and the amendments to the Arbitration Act. “Some of these reforms have been long overdue,” he added.

However, Jagdeep Chhokar, founder member of Association for Democratic Reforms, is of the view that it is not fair to judge legislative performance based on just numbers. “A number of significant legislation that is of national importance has become prey to partisan politics. Take the example of GST legislation that has become a political football,” says Chhokar. All such significant legislation should be based on consensus among political parties, he adds.

Chakshu Roy, head of outreach at PRS Legislative Research, points out that laws passed by Parliament should also be analysed by the level of parliamentary scrutiny they have gone through. “Many of them were passed without being referred to a parliamentary committee, and with little or no debate.” 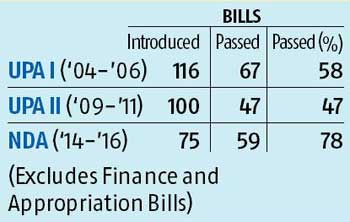 While legal experts welcome government’s focus on clearing the statute books of obsolete and redundant laws, Surya Prakash, fellow and programme director at Daksh, which undertakes research and activities to promote accountability and better governance, says it is only the first step in this direction. “The next steps of harmonising and consolidating multiple laws are the more difficult ones, which must be carried out after extensive empirical studies are done.”

About 75 per cent of targeted 60,000 officers trained for GST

30 of 32 parties back GST bill: govt claims, is hopeful of its