Some states have sought the right to tax business-to-business transactions, a move tax experts say could defeat the very spirit of the new levy and cautioned the Centre against any compromise on this front.

NEW DELHI: The goods and services tax (GST) is facing fresh turbulence related to a key component of the framework – the rules that will decide where goods or services are to be taxed — potentially impacting the rising e-commerce and e-delivery business.

Some states have sought the right to tax business-to-business transactions, a move tax experts say could defeat the very spirit of the new levy and cautioned the Centre against any compromise on this front. “The draft of place of supply rules is under discussion. There are differences over taxation of business-to-business transactions,” said a government official aware of discussions on the framing of rules. He declined to name the states. 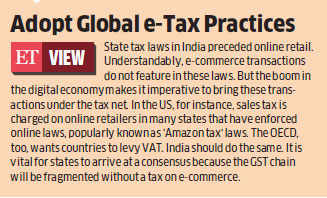 A sub-group, having officials from both the Centre and states, of the empowered committee of state finance ministers has been tasked to frame these rules.

Place of supply rules will determine where goods or services are supplied from and consumed and thereby determine the place of taxation, particularly so in telecom, transportation and ecommerce. Since, GST is conceptually a consumption tax, it should inprinciple be levied at the place of consumption.

The Centre favours integrated GST, to be levied on inter-state trade, on business-to-business transactions to keep the structure neat and more closely aligned to globally prevalent structures. This I-GST is proposed to be collected by the Centre and then devolved to the states in line with their revenue share.

Some states now want place of supply rules to allow them to tax business-to-business transactions even though final consumption may be taking place in another state. This would disrupt the flow of input tax credit and lead to dual taxation, issues that are already plaguing the ecommerce sector. The move could undermine the fabric of the GST, experts said. Globally, these rules have been the root cause of most tax disputes in countries having GST. “The place of supply rules not only determine where the service is provided but also the type of GST to be paid and who can claim credit,” said Bipin Sapra, partner, EY. He pointed out that since GST is a destination-based tax, in the case of B2B services, place of supply has to be where the service recipient is, else there will be no flow of credit.

“The states need to look at the bigger picture as services will continue to be freely provided across states and till they are taxed on a destination principle, GST is not feasible,” Sapra said.

The government has already displayed its intent to implement the tax reform that could lift the country’s GDP by an estimated 1-2 per centage points from April 1, 2016. It has awarded the contract to build and operate the information technology backbone to Infosys. The government is hoping for passage of the constitutional amendment bill in the winter session after which legislation for the tax itself would be taken up and rules made public.

Advantages and Dis-advantages of GST