MUMBAI: A system of ‘GST Compliance Rating’ for dealers has been suggested in the recent reports released by the Joint Committee on Business Processes in relation to the proposed Goods & Service Tax (GST) regime. Any fall in rating below a prescribed level would result in blacklisting a dealer and purchases from such dealer will no longer qualify for input tax credit (ITC) in the hands of the buyer. Details of defaulting dealers will be made available on a public domain to inform potential buyers. In simple terms, ITC is the amount of tax paid by the buyer on purchases made by him for which the buyer is entitled to claim a credit against the sales subsequently carried out by him.

Of the three reports submitted by the Joint Committee, the report dealing with ‘GST registration’ points out that such a rating is a measure to facilitate informed choices by the buyers and not a punishment measure. Those who have made purchases from such a blacklisted dealer will be able to avail the input tax credit only after the improvement of the dealer’s rating to a normal level. Once blacklisting is lifted, buyers can avail unclaimed ITC subject to this dealer uploading sales details along with tax and interest.

Three specific defaults have been identified that would result in blacklisting of a dealer. These are: Continuous short reporting of sales beyond a prescribed limit of 5% (of total sales) for a period of six months; continuous default for three months in paying ITC that has been reversed; and continuous default of three months or any three month period over a duration of 12 months in uploading sales details.

Malini Mallikarjun, indirect tax partner, BMR & Associates, says: “In respect of defaults that are basic, this mechanism of blacklisting could have detrimental implications for dealers who may have inadvertently defaulted in compliances. Further, it appears to be punitive to buyers, who will suffer for no fault of theirs.”

Bipin Sapra, indirect tax partner, EY, adds: “This recommendation of blacklisting defaulting dealers and denial of ITC to the buyers is a huge issue as there are several practical challenges also involved. Each time a buyer wishes to place an order, he has to verify that the dealer is not blacklisted. Further, it may also happen that the dealer is blacklisted post placing of the order. The consequences for non-compliance should rest with the dealer alone.” 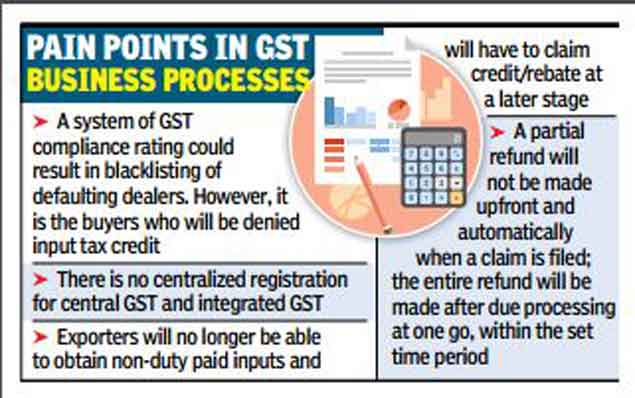 Mallikarjun says, “The report is also unclear on what is meant by default in paying ITC that has been reversed. Whether, such reversal is required to be made when the matter is challenged or on a final ruling is not brought out in the report.”

The report adds: There should also be a continuous rating system, provided under model law, for dealers based on parameters such as promptness in e-return filing, discrepancies detected where the dealer has had to make corrections, making prompt payment in lieu of reversed ITC, to name a few. While the system of blacklisting may only highlight deviant behaviour after it crosses a certain threshold, a system-updated dealer profile will serve as a continuing rating mechanism for the entire community and leaders within a certain industry can set a benchmark for others to emulate.

Under the proposed GST regime, for goods and services supplied within a state, both the centre (CGST) and state will concurrently impose GST. In addition for trade between states (an inter-state transaction), an integrated GST (IGST) will be levied by the centre. However, a centralized registration for CGST and IGST is not provided for in the report.

The other two reports issued by the Joint Committee are on GST payments and GST refundprocess. Currently, exporters of goods have the option of obtaining non-duty paid inputs and exporting final products without payment of duty. The Joint Committee has recommended that the option to procure duty free inputs for exported goods should not be available in the GST regime. It was felt that this would obviate various formalities required for making tax free supplies of goods to the exporter. “Merely by obviating the need to furnish a few documents, a substantial benefit to exporters has been taken away by this suggestion,” states Sapra.

The Committee has recommended that the GST law drafting committee may provide for the provision of rebate of duty paid on exported goods and the legality of the same could be examined by the Law Ministry.

“The lack of upfront exemption, will result in blockage of working capital for exporters,” points out Mallikarjun. There is another issue that would impact cash flows. Earlier it was suggested that as a thumb-rule, up to 90% of the refund claimed by a taxpayer should be sanctioned automatically by the GST system. The balance refund would be granted after verification of documents at the end of the financial year, and this process should be completely within three months. The committee after discussing the matter has recommended that partial refund should not be allowed and entire refund is to be made only at one go within the time limit set down in GST law.

As public and expert comments are currently invited against the suggestions made by the Joint Commission, experts hope that the practical difficulties of taxpayers will be looked into before finalization. On a separate note, it is learnt that the model GST law has been circulated among states and the Empowered Committee will meet shortly to discuss the same.

The economics of GST, hostage to politics

What is GST and why it matters to you