A top government source told ET that transitional amendment in the Constitution (122nd Amendment) (GST) Act, 2014, to roll out GST would provide cover to the government till the time this reform is implemented.

NEW DELHI: After a hectic day of parleys and opinion from the attorney general, the government feels it retains power to levy excise duty on goods other than petroleum even after the provision of the Constitution amendment law was notified on September 16.

A top government source told ET that transitional amendment in the Constitution (122nd Amendment) (GST) Act, 2014, to roll out the goods and services tax (GST) would provide cover to the government till the time this reform is implemented.

“We have had discussion with AG and he opined that there is no problem with the notification,” the official said citing Section 19 of the amendment. 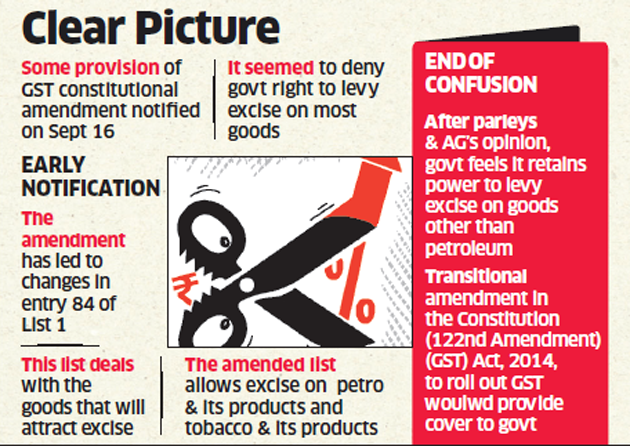 This provision says: “Notwithstanding anything in this Act, any provision of any law relating to tax on goods or services or on both in force in any state immediately before the commencement of this Act, which is inconsistent with the provisions of the Constitution as amended by this Act, shall continue to be in force until amended or repealed by a competent legislature or other competent authority or until expiration of one year from such commencement, whichever is earlier.”

The official said there are some constituents that need to be seen in the notification.

Firstly, the Section 19 says tax on goods and services to be taxed in any ‘state’, which refers to geographic entity of state and not by states. Secondly, withdrawal of power to levy tax lies with the competent authority and not the state legislature.

This protects the power to impose central levy during the transitional period of one year.

Revenue secretary Hasmukh Adhia tweeted: “The department of Revenue examined the validity and implications of notfns dated 10th and 16th Sept wrt existing taxes imposed by the Union and states.

“There is no legal infirmity in these notifications. Law dept has confirmed that there appears to be no legal requirement to issue any further clarification or notification in this regard.”

ET had reported on Monday that massive confusion had arisen after the Centre notified certain provisions in the constitution amendment law for GST with effect from September 16.

The notification said the government will not levy excise on goods other than petroleum products from this date, implying loss of power to tax other goods. The notification also binds states to accept GST within a year or they will lose power to tax.

The Constitution (122nd Amendment) (GST) Act, 2014, passed by Parliament last month to roll out GST, has made changes in Entry 84 of List 1 or the Union List of the 7th Schedule of the Constitution.

Essentially, the amended list provides that excise duty can be levied only on petroleum and its products and tobacco and tobacco products, thereby limiting Central Excise Act’s scope to these specified products.

Experts felt through this notification the government had surrendered power to levy excise except in goods mentioned.

GST and gold: what will be the impact

How to get enrolled with GST Portal (With Screen Shots)