The new regime is expected to put more money in the pockets of consumers as it could reduce transportation and logistics costs. Hiccups need time to be sorted out and will be an ongoing process

Finally, after 11 years, the Goods and Services Tax (GST) was rolled out on July 1. Even though it’s a bit early, let’s take a look at the expected impact of GST and the immediate impact of its implementation. One of the expectations from GST is that the prices of goods and services will come down. No doubt, the rate of tax is an important factor for price reduction. But, there are other equally important factors.

GST will bring down prices because of its structure and form. First, the minimising of cascading taxes through a free flow of input tax credit will lead to elimination of the hidden tax, that is, tax on the tax.

Secondly, by subsuming 17 indirect taxes of the centre and the states into one tax, GST will reduce overall compliance costs. Also, subsuming of Entry Tax/Octroi into GST will drastically reduce transportation and logistics costs. GST will do away with check posts at inter-state borders which were responsible for piling up of trucks, loss of man-hours and delay in transportation. All these costs were being finally passed on to the consumers. With GST, these costs will be marginalised, and therefore, should bring down prices across the board of all goods and services irrespective of their tax rates.

Now, the impact of GST rates. Theoretically, GST should have only one rate. But, in India, people are at different levels of society—some are below the poverty line, there is the lower middle class, the middle class, the upper middle class and the super rich. Further, the government has a commitment to the weaker sections of society. Therefore, India cannot have one rate of tax for all goods and services. One cannot imagine a “suit” and a “dhoti” attracting the same rate of tax. So, there was a need for different rates keeping in mind the needs of different classes of people.

Besides, India is not the only country to have more than one rate. France, the first country to introduce VAT in 1954, has five rates. The UK, Australia and many European countries have two or more rates. 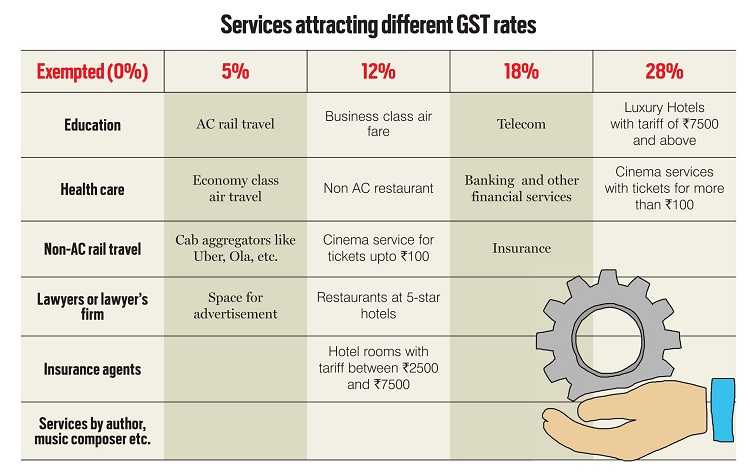 Against this background, the GST Council decided to have four rates apart from the exempted goods. Broadly speaking, the five rate-slots are: zero percent, five percent, 12 percent, 18 percent and 28 percent, according to their usage by different classes. For some of the goods at the 28 percent slot, there will be additional cess. Further, for gold, diamond and other precious metals, a special rate of three percent has been fixed (see box).

If one were to compare the rates of some items after GST and before, when the sum total of central excise, service tax, state VAT, etc, was imposed, the incidence of tax has come down. These are for the following items/sectors:

However, there has been an increase in tax rate for the following items/sectors:

Similarly, services where GST rates have increased to 18 percent from 15 percent are: Telecom, banking, insurance and other financial services, cinema services for tickets costing up to Rs 100, entertainment, hotel rooms with tariffs between Rs 2,500 and Rs 7,500, restaurants at five star hotels and AC restaurants with liquor licences. 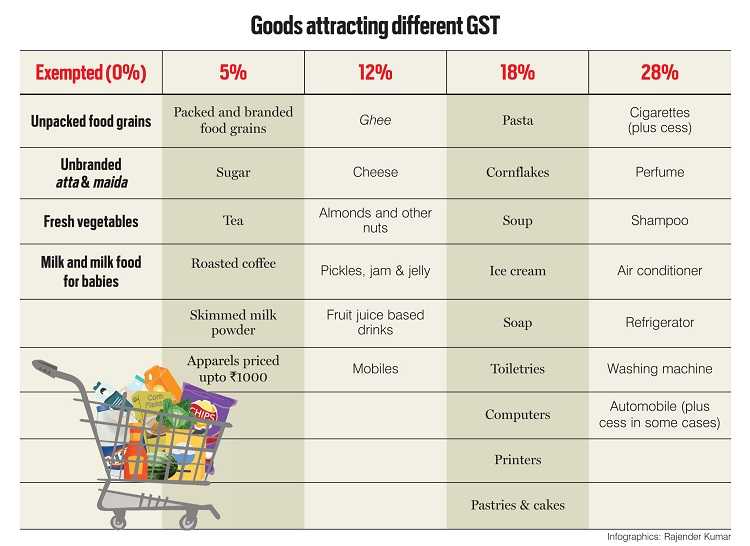 While talking about the increase and decrease in tax rates in the GST regime, one should remember that because of the benefits accruing from non-tax factors like seamless flow of input tax credit, marginalisation of cascading of tax, reduction in compliance costs, logistics and transportation costs, etc, the incidence of higher tax in some cases will get mitigated. Thus, a fall in prices in general can be expected. We will have to wait for a few months to see the actual position. The jury is still out on this.

As for the immediate impact from the point of view of implementation, a certain amount of confusion was always expected in the Micro, Small and Medium Enterprises (MSME) sectors and retailers. Quite a few of them were not ready with their computerisation and customisation of their software with GSTN, the IT infrastructure.

The situation was further aggravated as the GSTN did not get time to be fully operational in its business processes. The module for return filing and invoice matching was to be operational only by end-July and the excel sheet for uploading invoices by June-end. Besides, the last-minute rush for migration to GSTN and fresh applications for registration had put a lot of stress on the system. This resulted in delays on the first stage of registration itself.

Further, the MSME sector was waiting to be helped by the GST Suvidha Provider (GSP) for interface with the GSTN. However, as GSTN was not fully ready, it could not provide the application software for the interface to the GSPs. This is why the MSMEs were inconvenienced. All these could have been avoided if the implementation was deferred to September 1. Anyway, the government must have had other compelling reasons for maintaining the deadline. However, the centre must be credited with quick decisions in deferring a few critical compliance requirements. It offered tax-payers certain relaxations like deferring the return filing till September, carrying on business without waiting for registration number, etc.

GST, which has already shown some positive impact, should be welcomed. It is hoped that the initial difficulties of the MSME sector and retailers will be sorted out soon. The implementation process has to be taken as “work in progress”, and course corrections will have to be a continuous process.

Going by the numbers

GST – An optimistic Imprint on the Indian Realty Segment