NEW DELHI: The government is looking at ways to get traders to issue bills to consumers in a bid to check evasion of goods and services tax (GST), including the option of obtaining bills from a centralised system that comes with invoice numbers given in advance.
A senior government official told TOI that a trader can simply seek a bunch of bills and the numbers would be given to him. The trader can then use these bills when a sales transaction takes place. “In case there is a cancellation, the businessman can send the serial number to us through a message. But, it would be deemed that bills before that number have been used up,” explained the official, who did not wish to be identified.

The government has also set up a committee to examine various options, including issuing pre-designated bill numbers. The bills can be obtained periodically.

The latest move is part of the government’s efforts to clamp down on tax evasion, which is seen to be rampant and most consumers have observed that traders and shopkeepers are reluctant to issue bills and are seeking cash payments. “Be it a small shopkeeper or an interior decorator, no one wants to issue bills and all of them want cash transactions,” a senior official acknowledged. 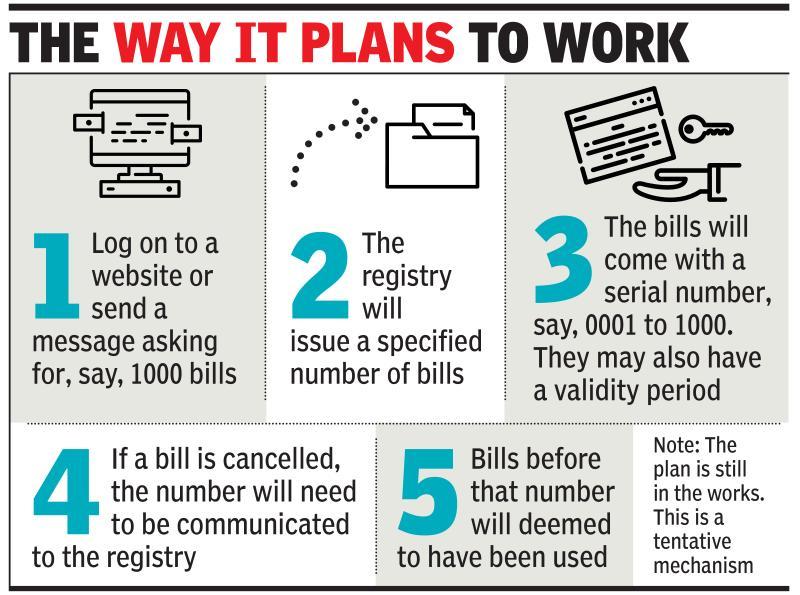 While other options, such as offering a discount in GST on card payments, are being explored, the government is hoping that e-way bills, reintroduction of reverse charge and invoice matching in some form will help it prevent evasion in the current regime.
The government had hoped that use of various tools would help track transactions better and check evasion but protests after the launch of GST forced it to suspend several of the measures. In addition, e-way bill took time to develop and technical glitches led to postponement of its mandatory use from February 1. “The government wants the system to be foolproof before it is introduced. It should be issued within a few minutes,” revenue secretary Hasmukh Adhia told TOI on Friday, adding that a fresh date will be notified soon.

E-way bills, which are to be electronically generated, are expected to help the government keep better tabs on goods that are shipped across the country with both interstate and intrastate trade to be covered by June.

IT, financial services cos can become GST Suvidha Providers

GST Bill: Will the first step be taken next week?

Draft GST (Compensation to the States for Loss of Revenue) Bill, 2016