Government is looking to take sting out of 1% compensation for manufacturing states that Congress has been citing to oppose GST, calling it an imperfect law.

NEW DELHI: The government is looking to take the sting out of the contentious 1% compensation for manufacturing states that Congress has been citing to oppose the goods and service tax (GST), calling it an imperfect law. This compensation is proposed at up to 1% and in effect could be a lot less, said a senior government official. The government needs to get broadbased support for GST across parties in order to stick to the implementation date of April 1 next year. 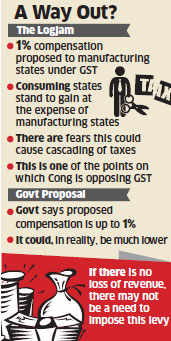 “If the concerned states do not face any revenue loss once the tax is rolled out, there will be no pressure on them to levy the tax,” the official said. “Also, 1% is the upper limit and at a very low level it will not have the feared cascading effect.”

The government hopes this clarification will help ease the bill’s passage when it’s taken up for discussion in the Upper House. The government is also willing to offer states full compensation over five years for any loss to them from the rollout of this levy.

Many experts have voiced fears that the 1% extra tax will distort the GST and cause cascading of taxes. The levy is proposed to compensate possible revenue loss to manufacturing states as GST is to be levied at the time of purchase and would tend to benefit consuming states.

“While the proposal is to have additional tax up to 1%, there is no certainty that the rate would be lower than 1%. Further, the GST Council may choose to extend this additional tax beyond two years,” said Pratik Jain, partner, KPMG India.

The parliamentary select committee on the constitutional amendment needed ahead of rolling out GST will give its report on Wednesday. The panel has supported full compensation to states for five years instead of tapering as provided in the bill.

The GST Bill has been passed by the Lok Sabha but ran into opposition in the Rajya Sabha, where the government does not have a majority. It was sent to a select committee of the house for scrutiny.

Congress, the main opposition party in the Rajya Sabha, has moved a dissent note on the report of a parliamentary panel on the GST bill expressing its inability to support the legislation saying that it is based on compromises and exclusions. It objected to the proposed composition of the GST Council, imposition of 1% additional manufacturing tax by states and demanded safeguarding of revenue of panchayats and municipal bodies.

The official said the Congress demand for changes in the composition of the GST Council to give threefourths representation to states and one-fourth to the Centre would tilt the balance in favour of the former. Jain said there should be a mechanism to ensure that the additional tax applies only on the first inter-state movement of manufactured goods and not on subsequent supplies.

“If it applies at each stage, then the impact could be much more than 1% on several products, particularly FMCG (fast-moving consumer goods) and the consumer electronics business,” he said. He said a better solution would be to explore other ways of compensating the states, such as increasing the GST rate itself by 1% or so.

Tracing GST’s evolution as an idea

Government firing on all cylinders for GST rollout

Is a progressive GST possible?