With plan and non-plan distinction being done away with from next financial year, the government expects to bring more attention to capital spending.

NEW DELHI: The government expects its tax buoyancy to increase after the goods and services tax (GST) is rolled out, a sharp contrast to many experts warning of disruptions in tax machinery and slower revenue growth in the initial years of this tax reform.

In the medium term expenditure framework released last week the government expects higher economic growth, GST and other policy measures to help lift gross tax revenues to 10.9% of gross domestic product (GDP) in FY18 and 11.1% of GDP in FY19. The Centre’s tax-to-GDP ratio was 10.7% in FY15, almost same as projected 10.8% for the current fiscal.

“The larger issue on the expenditure side that remains to be tackled relates to the revenue-capital expenditure imbalance,” the government said in its statement, promising to lift total capital spending to 15.6% of total spending in FY19. “It is presumed that with the focus shifting to capital and revenue expenditures with the merger of plan and non-plan from Budget 2017-18, government will take proactive measures for enhancement of the capital component within its total expenditure,” it said. The government also sees total spending decline from estimated 13.1% of GDP in FY17 to 12.2% of GDP by FY19 by curtailing the growth in non-developmental expenditure. 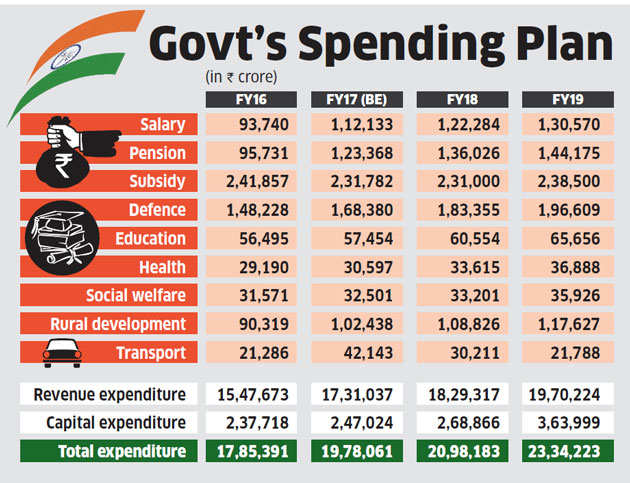 MORE TO COVER PAY COMMISSION
The government said it will need more to cover its seventh pay commission liability — both for pension and salaries — as the amount set aside may not be enough. To absorb complete impact of pay revision in 2016-17, “salary provision made in BE 2016-17 will require some enhancement in RE 2016-17” the statement said. Spending on salaries is projected to increase 12% in FY18 and 8% in FY19. Similar increase in pensions is suggested that are set to increase 10% in FY18.

LOWER DISINVESTMENT
The government has planned a less ambitious disinvestment target in the years ahead. This year, disinvestment is estimated to fetch .Rs 56,500 crore (including.Rs 20,500 crore from strategic disinvestment). “Over the medium-term framework, the target of disinvestment receipts are kept flat on conservative side, at .Rs 40,000 crore both for 2017-18 and 2018-19,” the government said in the statement.

ET view: Rational exuberance
The government’s assessment is not unrealistic. Indeed, GST will drive investment, growth and tax revenues. That’s because companies will be able claim credit for all input taxes paid across the production chain. It will cut out the cascade of taxes and make production more efficient. The government’s goal should be to double the current tax/GDP ratio of about 16% (combined states and Centre) to close in on the average for OECD members. This, in turn, will give welcome fiscal space to raise public investment in a big way.