NEW DELHI: In what could spell trouble on the tax front for India’s ecommerce companies, some state governments have asked those that function as marketplaces to provide monthly sales data for vendors registered on their platforms.

More states are expected to follow the lead of Delhi, Uttar Pradesh and Kerala, which have introduced new disclosure norms, likely adding to the complexity and cost of ecommerce. This would mean an added layer of scrutiny on companies such as Flipkart, eBay and Amazon India, all of which are structured as marketplaces that facilitate trades between buyers and sellers in order to stay in compliance with overseas investment rules.

While invoices accompanying online purchases through these sites mention taxes levied, the states are looking to make sure there is no evasion of levies taking place through a complex web of delivery structures. The marketplace model has led to some confusion about the levy of sales tax or value-added tax levied by states.

An Amazon India spokesperson said: “We are undertaking compliance as per requirements of local state tax laws.” Other ecommerce companies couldn’t immediately be reached for comment. 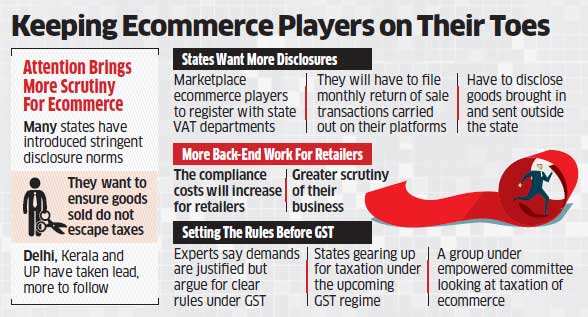 India’s ecommerce business is expected to grow up to 55 per cent annually to become a Rs 50,000-crore business in the next three years, according to Crisil Research.

State governments do not want to lose out on any revenue and are therefore seeking to ensure they get what’s due to them.

Amazon India has been embroiled in a tax tangle with Karnataka. The local authorities had questioned its fulfillment centre model and sought to impose value added tax on goods sold through the site, treating it as a commercial agent, a claim the company has rejected. The case is currently in court.

The Delhi government wants ecommerce companies to provide details of vendors from elsewhere selling to buyers living in the state and vice versa. The state has said that the first return in this regard needs to be filed by July 20.

Kerala has made registration with the state tax department compulsory and asked companies to file monthly returns disclosing details of transactions including goods transported to and from the state.

The Uttar Pradesh tax department has made it mandatory for air cargo operators, courier services and warehouses to get a service provider registration number and maintain records in the state for operating a business that involves taxable goods.

States have already set up a group under the aegis of the empowered panel of state finance ministers on the goods and services tax (GST), which is scheduled to be implemented on April 1 next year, to ensure that the subject is tackled effectively under the new tax regime. The measures undertaken by the three states set the stage for taxation under GST.

The development comes at a time when the Narendra Modi government is trying to improve the ease of doing business in India.

Experts said the demand for greater disclosure is justified but want a clearer framework under GST to avoid unnecessary litigation.

“So long as the ecommerce companies are only required to furnish information of sales made by the vendors on their platform, it can be justified as a compliance assurance mechanism,” said Pratik Jain, partner, KPMG India. “However, there are states that are now demanding VAT from these companies, which is leading to avoidable complications.”

He said it was imperative that under GST, the rules clearly state which entity is liable to pay tax so that litigation can be minimised.

A real GST for businesses