NEW DELHI: Faced with the unstinting solidarity of the Modi government with foreign minister Sushma Swaraj and Rajasthan chief minister Vasundhara Raje over ‘Lalitgate’, Congress has made an interesting proposal – it will not block the Goods and Services Tax bill despite its strong reservations if it gets the two scalps.

The swap of sorts has been tacitly suggested to the government as the way out of the looming stalemate in the monsoon session of Parliament starting on July 21. While keen on passage of the GST bill, described as a bold effort to rewrite the taxation structure, the government has refused to be tempted. “No question,” a senior government functionary told TOI when asked about the offer.

The opposition’s feelers were made after the Modi government belied Congress’s estimate that it would give in to pressure for the resignations of Swaraj and Raje for helping “fugitive” Lalit Modi.

Congress, which has raised objections on the GST bill with the Rajya Sabha select committee, is determined to ensure that Parliament doesn’t function during the monsoon session. Although some regional players are tepid in their response to the disclosures about links of Swaraj and Raje with Lalit Modi, Congress reckons that its sustained pressure and the fear of ceding political space will make them come around, resulting in a phalanx to batter PM Narendra Modi’s fortifications in Parliament.
The lineup will, Congress tacticians feel, be strong enough to neutralize the superior numbers that the government has in Lok Sabha. The opposition is in majority in Rajya Sabha, in any case. 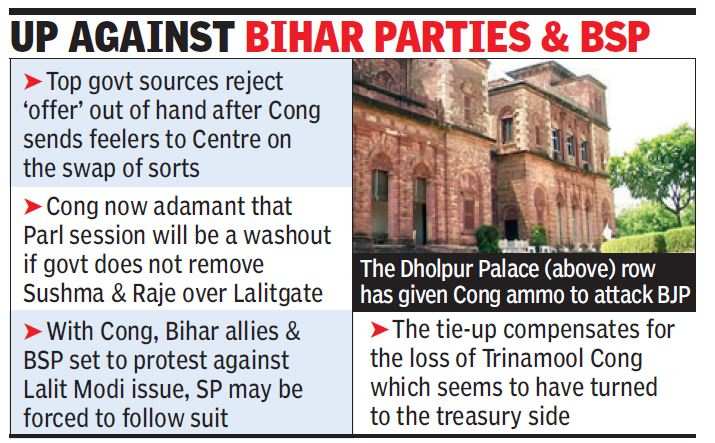 Congress has listed five objections to the GST committee, seeking inclusion of tobacco and electricity duty in GST, removal of 1% tax over GST to compensate manufacturing states, inclusion of compensation formula in the bill, restoration of dispute settlement mechanism and a categorical fixing of ceiling on GST rate.
Congress, however, is not bent upon stalling the bill, especially with key regional outfits coming out in its support. If the BJP regime agrees to the proposed compromise, Congress may be willing to “walk out” of Rajya Sabha to let the constitutional amendment bill pass.

While it may be a major concession to BJP which stalled the flagship tax reform during UPA-2 to convey an impression of policy paralysis, Congress thinks it would not be the loser in the bargain.

Resignations of Swaraj and Raje would be a big breach in PM Narendra Modi’s armour in the form of an acknowledgement of guilt by the BJP regime, possibly opening the doors for similar arm-twisting for future violations. Also, the Congress is not too keen to block economic reforms it had initiated, like it supported FDI in insurance after initial protests.

BJP’s junior minister for parliamentary affairs Mukhtar Abbas Naqvi said, “The select committee is looking at GST on the demand of Congress. After the committee submits its report, there is no logic in opposing it. When Congress was in government, there would be a hit-wicket every day and since they are in opposition, they are delivering a no-ball every hour. It will be a political disadvantage for Congress to oppose it.”

Are we ready for GST ?

“Level of optimism on GST has gone up”

GST bill unlikely to make it through disrupted Parliament

GST is not just a tax reform but it is a socio-economic reform: Sachin Menon, KPMG