More than 300 goods are exempted from excise duty while there’s a blanket exemption for manufacturers with a turnover below Rs 1.5 crore.

NEW DELHI: Your monthly grocery bill could rise after the Budget as the government is considering the elimination of excise duty exemptions for some items and moving up the lowest rate currently applied on many goods to set the stage for the goods & services tax (GST).

Green tea, dairy spreads, yoghurt, cheese, ice-cream, frozen food products, pasta, ready-to eat foods, packaged fruit juices and soya milk could see excise duty kicking in or going up to the standard rate of 12.5%. Many of these products currently attract nil to 6% excise. “A number of exemptions in the excise duty have been sitting for years,” said a government official. “With GST round the corner, it makes sense to take a re-look at the existing structure.” He pointed out that a number of exempted items already attract value added tax (VAT) in some states.

The government is expected to give a renewed push to GST in the Budget session by attempting to win the support of Congress for the constitutional amendment Bill that needs to be approved before the new tax can be rolled out. 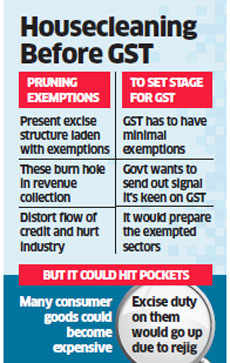 The government’s deadline for GST is April 1 but it will be difficult to meet this. More than 300 goods are exempted from excise duty while there’s a blanket exemption for manufacturers with a turnover below Rs 1.5 crore. The turnover threshold for levy of VAT in states is Rs 8-10 lakh while that for GST is expected to be Rs 25 lakh.

The list of exempted items under GST will in any case need to be revised substantially so that it only contains essential items. This is key to keeping the GST rate low. “The lower the rate and the more the commodities that are taxed at this lower rate, the higher will be the standard rate just as a matter of arithmetic,” said the panel headed by Chief Economic Adviser Arvind Subramanian to suggest a revenue-neutral rate for GST.

The committee had suggested a standard GST rate of 17-18% and a concessional rate of 12%. A call on the proposal will be taken in line with the government’s overall philosophy of boosting manufacturing in the country, said the official cited above.

That’s because exemptions have the effect of undermining industry competitiveness. Excise on inputs used is not usually exempted and this tax then gets embedded, hurting the sector itself. The government has scrapped exemptions on a number of pharmaceutical products as part of its plan to make domestic manufacturing competitive.

Experts said GST provides the government a good opportunity to clean up a system complicated by a plethora of exemptions and make everything subject to simpler but universally applied rules. “An ideal GST regime would mean that there are no exemptions and neither are goods and services taxed at concessional rates,” said Anita Rastogi, partner, indirect tax, PwC. “Since GST may not come in April 2016, the government may look at taking steps towards GST by way of removing a few exemptions. This is also because exemptions break the credit chain which then leads to burden of additional cost on ultimate consumers.”

It makes sense to withdraw exemptions ahead of the roll-out of GST. Multiple rates are not necessarily inimical to GST. Merit goods such as food items should attract a lower rate than, say, the standard 18% rate. Retail prices will drop with GST as manufacturers will get credit across the value and production chain for all the taxes paid on inputs, making production more efficient. Exemptions will snap the value added chain, mess up the tax system and must be eschewed.

GST Rates and its Impact

The ‘Baking’ of GST