NEW DELHI: The goods & services tax (GST) bill will be taken up for discussion in Parliament this week and the government is not leaving any stone unturned to make the all-important reform a reality.

The GST seeks to create a seamless national market in the country by replacing a plethora of state-level taxes and central taxes with just one levy.

The new administrative framework, as also the Congress party’s demand to cap tax rate in Constitution, are expected to figure in the meeting of the empowered group of state finance ministers on Tuesday, an ET report said.

The business advisory committee in Parliament has allocated time for the Constitution amendment bill for GST this week.

“GST is something that will bring about a big transformation which market is watching carefully. One possible reason is that it will improve the tax-to-GDP ratio by around 1.5 per cent,” Gopal Agrawal, CIO, Mirae Asset Global, said in an interview with ET Now. “GST is a structural long-term reform and its benefit will percolate down over time,” he said.

We have collated the top five reasons why investors not just in India but also across the globe are watching the GST bill keenly.

Impact on markets: If GST becomes a reality, it would be a major trigger for the market, which has been moving in a narrow range ahead of the debate in Parliament. The Nifty50 closed flat while the S&P BSE Sensex closed 0.12 per cent lower for the week ended July 22.

“We believe the market has already started to rally in expectation of a likely passage of the GST bill. If the reform gets through, this rally is likely to continue further,” Vinod Nair, Head of Research, Geojit BNP Paribas, told ETMarkets.com.

“It will bring in sea change in transportation of goods like the number of days will come down, the cost of carry and octroi duty will get reduced. We can expect 5 to 7 percentage gain in the near term and likely rerating of the market,” he said.

FIIs money waiting on the sidelines: The GST bill is an important piece of legislation, which will permanently change the way businesses and commerce is done in India. This will facilitate ease of doing business in India and improve efficiencies.

“Apart from creating efficiency in the system, the generation of black money will be curtailed to a large extent which will, in fact, restore the huge purchasing power in the hands of the consumer, thus self-propelling the economy into a spending and investing cycle,” said Jimeet Modi, CEO, SAMCO Securities.

“Once the bill gets passed, huge domestic and foreign funds will flood the Indian market,” he said.

However, if it does not happen, the market will be disappointed in the short term but long-term expectations will be still remain alive.

Benefits of GST implementation: The GST will radically change the way businesses are done with potential benefits of cost savings and huge efficiencies in the system leading to higher a GDP growth rate in the country, experts said.

“If the GST bill gets through, we can expect a change in the indirect taxation to the respective sector. This will also benefit companies with a reduction in the cost of inventory and ensure better turnaround for goods. Sectors with high unorganised segments will benefit due to standardisation of taxes,” Nair said. 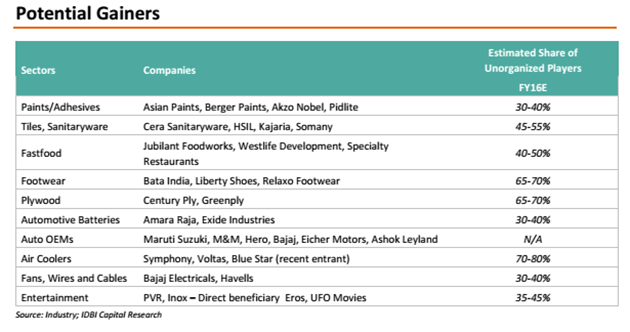 Sectors to benefit from GDP: GST will benefit sectors that have a large unorganised market. In other words, those which have multiple small players.

“Once GST gets implemented, these sectors with the unorganised market will benefit due to lower inclination for tax avoidance by smaller players, thus creating a level-playing field for all players,” said Modi of Samco Securities.

Companies to benefit from GDP: GST will have a positive sentimental impact on the markets in the short term, but most of the upside has already started reflecting in the prices of some companies that are likely to benefit more from the bill.

Companies like Havells India in electrical accessories segment, Relaxo and Bata India in the footwear segment could be major beneficiaries. In the wood and allied industry, Century Plywood and Greenlam Industries should benefit. In the tiles and ceramics segment,Kajaria and Cera Ceramics would benefit from GST.

Textiles, garment industry yet to shrug off GST blues

Arun Jaitley to discuss GST bill with Congress next week

Govt to speed up Rs 5,000 crore refund to MSMEs

GST Council may consider national bench of AAAR next month