NEW DELHI: Looking to buy a new iPhone or even a car by trading in your old handset or 10-year-old hatchback? This kind of exchange could cost a bit more than just depreciation when the proposed goods and services tax (GST) is rolled out. The draft GST law proposes to bring barters, exchanges and licences under its purview. The levy is set to be implemented from April 1 next year,assuming that the government and the Opposition can reach a consensus that will pave the way for the necessary legislative approvals.

The planned inclusion has implications for the automobile, consumer durables and mobile handset industries, where barters and exchange of old models for new ones is a common practice. Such transactions currently don’t attract value-added tax.

Those purchasing any product in exchange pay VAT only on the cash component and not the value of the product exchanged. Including barter would imply that consumers will have to pay GST on the full value.

This is because the law seeks to put in place a so-called clean chain without disruption in payments to ensure tax credit flows seamlessly. Experts said valuation would be the key factor.

“It would have an impact on consumer electronics and automobile sectors, wherein old items or cars are exchanged with a new product at a reduced price,” said Pratik Jain, partner, KPMG India. “It would need to be seen how goods under barter or exchange would be valued.”

The concept of valuation, akin to that prevalent in customs and excise, is being introduced to ensure that tax is levied on the actual transaction value. This is the money actually paid or payable where the supplier and recipient are not related and price is the sole consideration. 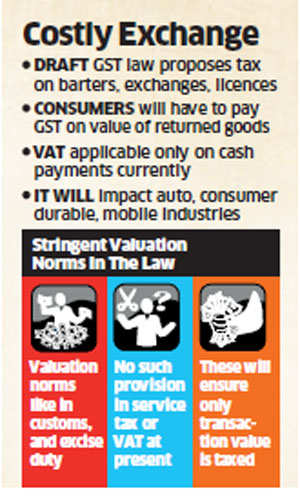 Experts said bringing barter under the tax net would make it easier to settle disputes.

But “valuation of goods and services will be a challenge and clear guidelines are required to mitigate any disputes,” said Bipin Sapra, partner, EY. “The concept of barter which exists in certain state laws and service tax has been introduced in GST.

The valuation in such cases would be quite involved, specially where used goods are being returned to buy new goods.”

The GST law is being given the finishing touches by a panel of officials from the central and state governments. According to the draft, seen by ET, GST will apply on supply of goods and services as against provision of service, sale or manufacture of goods currently. Supply will include barter, exchange and licences such as those for mining or spectrum.

Also proposed is tax deduction at source (TDS), a concept prevalent in direct taxes, for government and other agencies.

GST seeks to replace central and state taxes such as excise duty, service tax, value-added tax, entry tax and octroi with a single levy and create a unified national market in the country. It would remove tax on tax with full flow of input tax credit, helping bring down prices for consumers.

Advance Ruling Authority under GST: Does it really solve the taxpayer’s issues?

How will the GST impact your startup business

‘Delay in GST is main obstacle for Swedish firms’